What is a Cooling Tower?

Cooling towers are powerful heat exchangers that provide temperature regulation for a variety of industrial processes. Unfortunately, while they’re critical to many applications, cooling towers can easily succumb to a number of problems that hinder their operations.

Without proper system maintenance, cooling towers will become damaged and less effective at heat exchange, leading to performance and efficiency losses. However, with consistent maintenance and proper water treatment, you can keep your operations running, costs low and cooling efficiencies high.

Cooling towers are subject to a number of problems, some of which are unique to cooling towers and how they operate. What’s more is that many of these issues build upon one another, creating a vicious cycle of maintenance problems if not properly addressed as a whole.

The top 5 cooling towers issues that you’re likely to face are:

Getting to the root of each of these problems is necessary if you want to maintain efficient and reliable and cooling tower operations.

Bacteria and viruses aren’t the only microbes that contaminate your water supply. Over time, microbiological deposits like fungi and algae can form a slime referred to as a biofilm on the heat transfer surfaces of your cooling tower.

As these biofilms develop, your tower’s impaired heat transfer can lead to significant fouling and cooling inefficiencies. If the deposits get bad enough, they can also obstruct the free flow of water and air, weighing down the structural members of the tower and potentially causing them to break.

Similar problems can occur when you have an abundance of mud or grime. Learn More about the Costs of Fouling Here!

As your cooling tower runs day after day, dirt and other small particles will slowly build up within the tower. Essentially, little bits of whatever is in the water will get trapped inside the tower with each run through.

These particles can clog the tower packing, reducing its ability to cool the recirculation water. The smaller the particle, the harder it is to get rid of. Fine particles, especially those below 5 microns in diameter, will cause significant issues due to their high surface area and how hard it is to remove/filter them out of a system. Learn More about the Costs of Particles Here!

Scaling occurs within a cooling tower when your concentration of dissolved solids becomes greater than their solubility in the water. Calcium sulfate, calcium phosphate and other calcium salts commonly cause scale, as well as certain materials such as silica or silicates when found at high concentrations.

Similar to biological buildup, scale will impact the heat transfer surfaces in your tower and lower your cooling efficiencies. Scale can be a particular problem in cooling towers due to the propensity of certain materials to have lower solubility’s as the temperature rises. Learn More about the Costs of Scaling Here!

If you’re operating a water-handling system, then you’re bound to have corrosion. Specifically, you’ll have corrosion wherever the water comes into contact with metal.

Open, recirculating cooling water systems can lead to corrosion from the water’s higher concentrations of electrolytes caused by evaporation. This problem gets worse as the water’s pH levels become more unstable. Learn More about the Costs of Corrosion Here!

While not as common as the other leading causes of cooling tower problems, foaming can occur from the cascading water in the tower. This can then make the cooling tower sump overflow or cause the fans to blow foam out of the top of the tower. Increased fouling can occur from foaming since you’ll have higher concentrations of microbiological contaminants in the foam. Learn More about the Costs of Foaming Here!

How Do You Maintain A Cooling Tower?

Filtration? Chemicals? Or Both?

Beyond clogging the tower’s packing, fine particulate is a major contributor to fouling and biofilm. That biofilm can lead to increased corrosion, which in turn degrades the equipment, adding to scaling and even more heat transfer inefficiencies. Fine particles and dirt can also interfere with the function of biocides and other water treatment chemicals, making it difficult to treat the water. 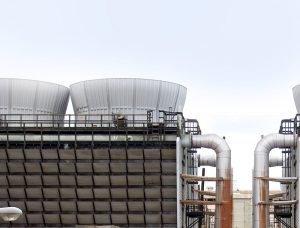 That’s why filtering the fine particulate in the tower’s water, in conjunction with chemical treatment, is absolutely necessary to clean cooling tower operations. However, not just any filter will do.

High-efficiency side stream filtration units are required to remove ultra-fine particulate from your cooling tower streams. While other equipment like automatic screen filters and plastic disc filters can only filter particulate down to 10 microns, high-efficiency side stream filtration units can filter particles down to 0.45 microns.

High-efficiency side stream filtration units offer a number of other benefits, including:

When it comes to side stream filtration units, ChemREADY’s professional-grade high-efficiency system filters offer the best water treatment solution for cooling towers. With their modular, cost-efficient designs and no-hassle installation, ChemREADY’s filters offer the flexibility and redundancy you need to ensure clean operations.

Here at ChemREADY, we can help you optimize your cooling tower water treatment. Our particle analysis service will help determine your filtration needs, and our quality chemicals will get your water in the optimal state for mechanical filtration.

We’ll make sure that you get the perfect side stream filtration unit to help keep your cooling tower running.

To learn more about how you can become compliant for your water quality, Contact Us here!

Learn more about our Water Treatment Services and Chemical Products