A common boiler system failure is leaky water tubes. How important is it to properly maintain boiler systems and keep your boiler operating at peak efficiency? Well, leaking boiler tubes can cost a company thousands of dollars in lost efficiencies, elevated maintenance costs, and in the worst cases, added risks associated with complete boiler system failure. ChemREADY can help companies who have boilers mitigate the risk of boiler tube leaks through proper treatment of the boiler’s water system.

While leaks can occur for any number of reasons, the main causes of boiler tube leaks are tube corrosion, unified unit corrosion, scale, thermal shock, and improper boiler water treatment (post-installation). Preventing boiler tube leaks and failures starts with understanding why they happen in the first place.

Plant managers and engineers plan for proper treatment to keep your water boilers up and running! 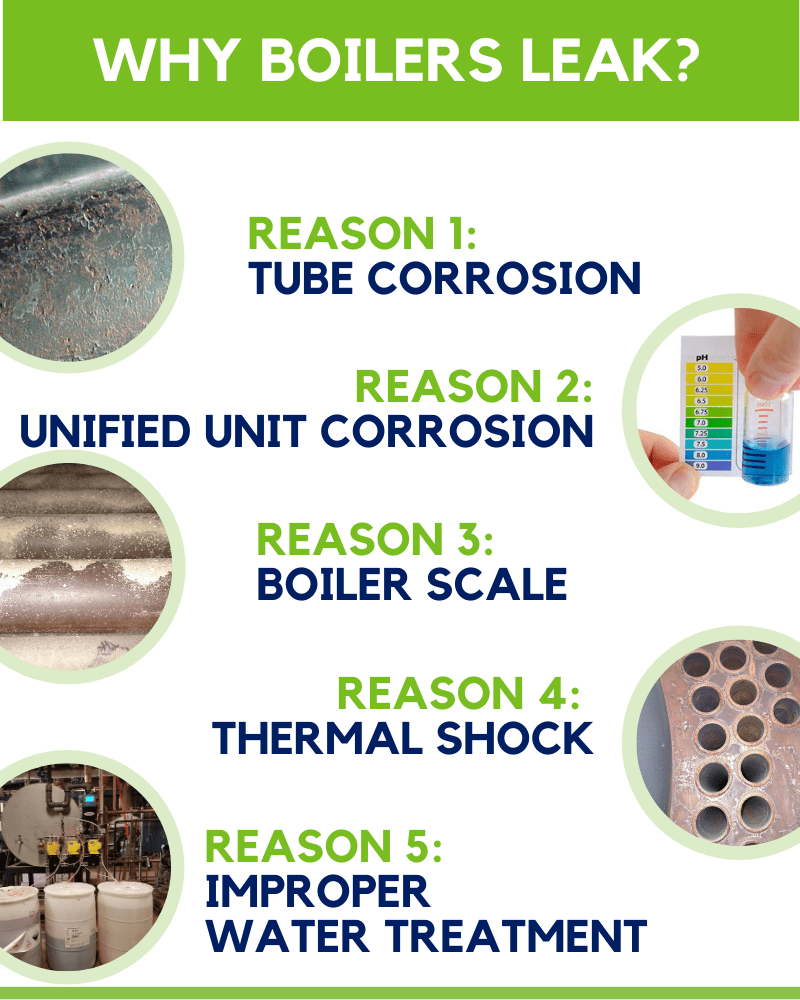 Corrosion and the breakdown of system components are the leading causes for boiler leaks. While this can theoretically happen anywhere within the boiler, corrosion in the tubes themselves is the most direct cause of leaks.

Tubes can become corroded over time due to oxygen pitting. This is where there is excess oxygen in the boiler water itself, which causes corrosion when iron or other materials react with the oxygen molecules. The lower the temperature of the boiler feedwater, the more oxygen is introduced to the boiler, causing a higher risk for oxygen pitting within the tubes. By maintaining higher temperature feedwater, you can reduce the risk of oxygen pitting.

To help prevent tube corrosion and oxygen pitting, it’s best to use what’s known as an oxygen scavenger, such as ChemREADY’s Boiler Deoxy products. Oxygen scavengers are chemical agents, like sulfite or bisulfite ions, that react and combine with dissolved oxygen to form sulfate, effectively removing excess oxygen from your system. 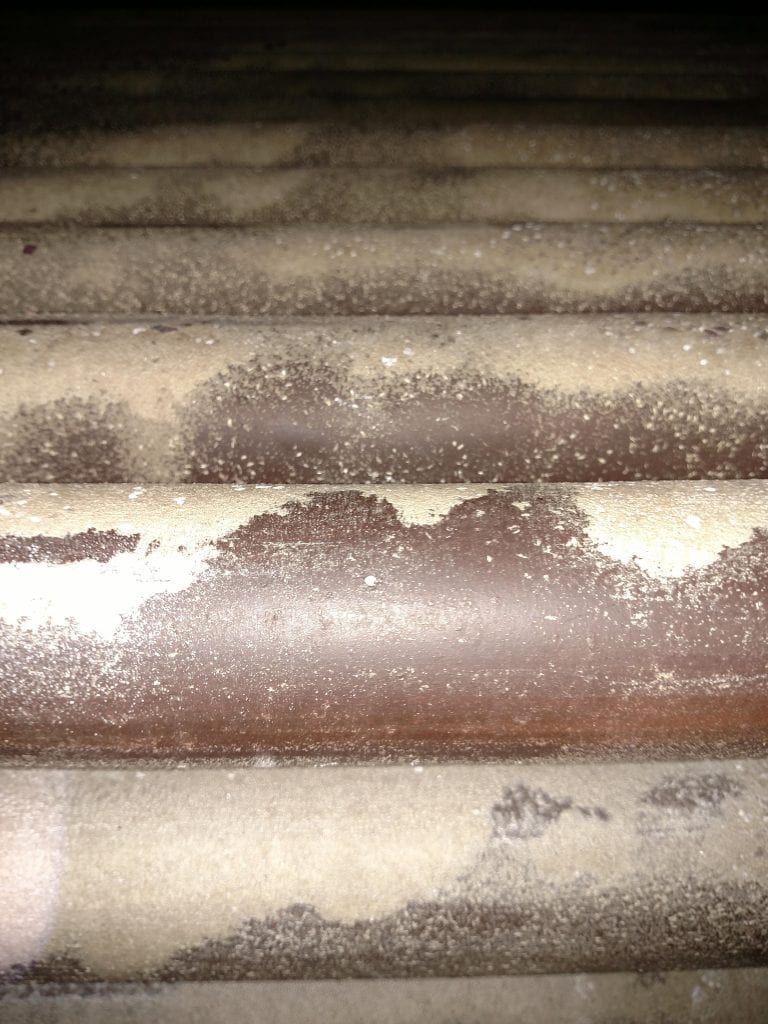 When you have pH levels below 8, your system is in a state of increased corrosion due to the higher levels of acidity in the water. Even though a pH of 7 is technically neutral, you run the risk of dipping down into acidic levels if anything goes even slightly wrong.

At ChemREADY, we like to see boiler systems at pH levels of 10 or above to ensure that corrosion throughout the unit is kept to a minimum. To increase the pH level of your boiler water, it’s best to use a pH or alkalinity adjuster, like our Boiler pH, which is a blend of chemicals specifically designed to adjust the pH levels of your boiler.

Scale is another issue that can occur within boilers which leads to tube leaks. Having scale build up in a boiler can impair heat transfer, leading to tube leaks as pressure increases. This can also clog blowdown valves and pressure release valves.

To reduce scale within a boiler, chemical softeners and scale inhibitors can be used. BOILER DESCALE products are formulated specifically for boiler systems, boasting the ability to solubilize contaminants commonly found in boiler feedwater in order to provide the greatest potential for maintaining clean boiler heat transfer surfaces.

The BOILER DESCALE line and similar products work well in conjuncture with scheduled boiler blowdowns. This is where water is intentionally flushed or “blown out” from a boiler to help avoid the buildup of scale and other impurities that can form during steam evaporation. Blowdowns also can remove suspended solids that are present within the boiler, which helps if there are any clogs or obstructions within your boiler tubes. 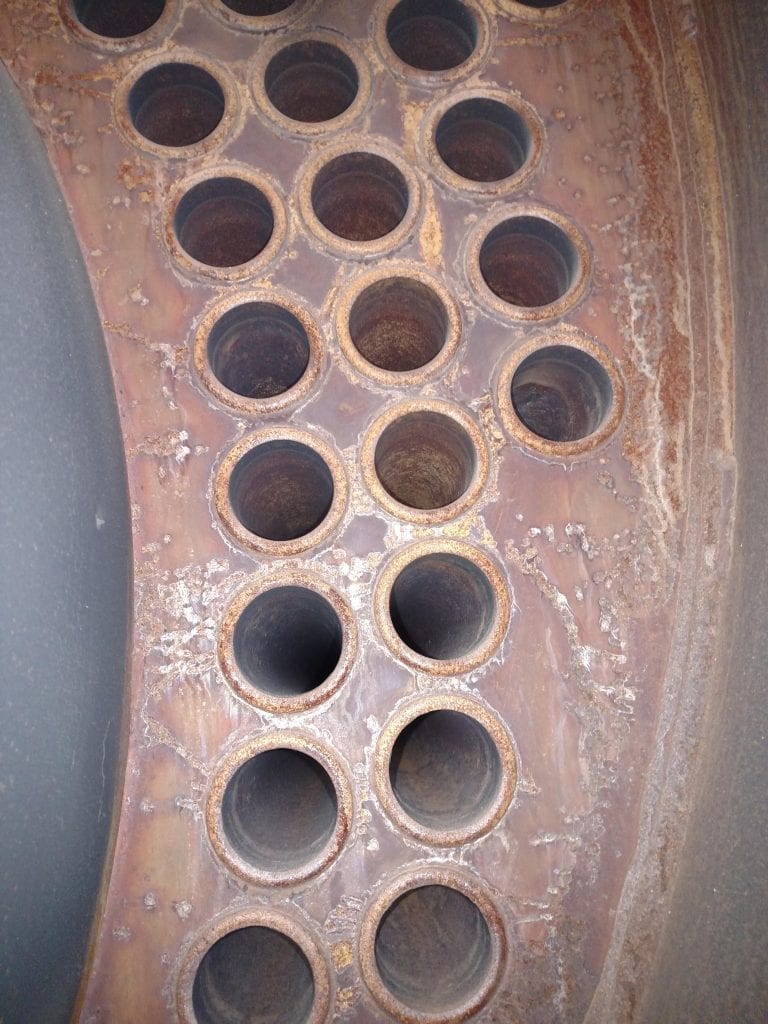 Anyone who has ever tried to wash a warm dish with cold water has experienced the quick and potentially devastating effects of thermal shock. This can occur when cold water is introduced to a boiler. The resulting thermal shock can cause a boiler’s tubes – as well as most any of its components – to burst or leak.

The solution here is to make sure that your boiler feedwater is at the proper temperature before being added to the boiler.

Picture this: a company has just spent thousands of dollars installing a brand-new boiler and is ready to start the boiler up for operation. To help preserve their investment, they must implement a proper

water treatment program at this critical junction. Running the boiler with untreated water will lead to premature corrosion of the tubes and scaling of the system, potentially leading to a failure of the boiler itself well before its intended life cycle. Proper boiler water treatment is essential to maintaining the boiler and keeping maintenance cost to a minimum. Overlooking this important preventive maintenance activity will significantly increase downtime, as well as the overall cost of the system.

Along with supplying the industry’s best products that help reduce corrosion and scale buildup in boiler systems, ChemREADY offers an expertise that’s invaluable at keeping your systems operating at peak efficiency. We offer a variety of services, including:

· Supervisory programs with or without chemicals